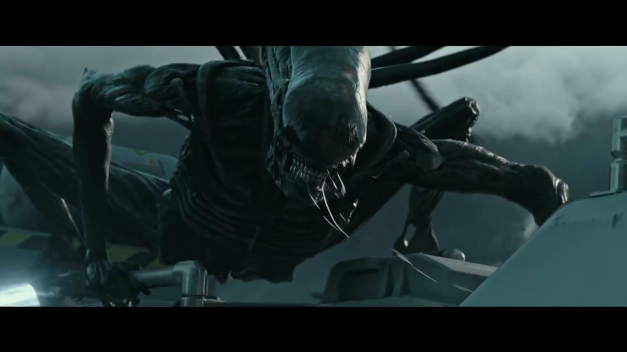 Alien, the seminal horror classic from 1979 is easily one of my favourite movies. Alien terrified generations with its dark temperament and gratuitous oral penetration, which incidentally culminated in one cinemas most brutal, nauseating scenes: a deadly Alien bursting through John Hurts now convulsing body, spurting blood through his exposed chest cavity, which is still the series most defining moment. Every scene, however trivial had a purpose. Whether it established chemistry amongst the crew, the occasional division between shipmates, the claustrophobic ambience of the Nostromo, the commercial towing vehicle carrying 20,000,000 tons of iron ore, or conveying the desolation of the vacant planet that accommodates adverse weather conditions seldom seen outside the UK and the now infamous reveal of the derelict alien spacecraft. Not to mention H.R Giger’s exquisite artistry that was the core inspiration for the ferocious, acidic blooded parasites; the Xenomorphs. It was conceptually bold, startlingly audacious movie that without the exuberant direction of Ridley Scott could’ve been a lambasted B movie, forgotten by critics and audiences alike. Alien spawned five sequels, one prequel, a host of comics books and further novelisations as well as merchandise, video games and innumerable parodies that have solidified Alien as cultural icon, thus creating an endearing legacy that has endured despite the economical inferiority of its proceeding attachments. After a 30 year absence from the series, Ridley Scott returned with 2014’s much maligned prequel “Prometheus”. With a vaguely defined story and abject crew of dumb scientists that treated obvious threats like a child would treat a puppy, Prometheus ultimately failed to resonate with any coherent investment. Scott, seemingly aware of the of the fans desire for a more affectionate consort to his original material sought to rectify this by not only including the parasitical organisms that sought refuge in John Hurts rib cage back into the movie, but include Alien in the title. What he achieved however is to prove that he could make the same movie 3 times, with various degree’s of success.

“Oh look its that guy, that girl and that other bloke!”

Alien: Covenant follows the terraforming crew of the eponymous ship destined for a planet suitable for human colonisation. Of course they intercept a distress signal along the way, things go wrong and are passively forced to land on a neighbouring planet that accommodates conditions even more perfect for human habitation. The expedition goes awry, people get infected and aliens begin bursting through every naturally occurring orifices and some fashioned through devastating force! The problem from the off is the sheer number of passengers on this ship. There are 15 or so, but only 5 or 6 of them will have more than a couple of lines of dialogue. Whereas the crew of the Nostromo felt like an ensemble, here most of the crew are there purely to die in the most gratuitous way possible. Nothing but mere subsidiary characters in metaphorical red shirts, that act as disposable cattle, bleating and mooing with as much depth as a puddle. Ridley Scott also has a penchant for killing marriages in this film? As well as lovers in an obligatory shower scene. Because motivations are so fleeting and people are dispatched just as quickly there isn’t really sufficient vigour amongst the cast to establish a report. Tennessee is probably the most affable character, with his interactions with others feeling more affluent and natural. Daniels, the main thrust of the female cast is certainly no Sigourney Weaver, but does an admirable job to a point. I just found her attempts to convey vulnerability were a little inconsistent and jarring, alternating between a scared infant to an embolden soldier a little too readily. What elevates the movie beyond the inept banality of Prometheus is Michael Fassbender’s performance. Or should that be Michael Fassbender’s?

“Who needs helmets when we have hats with flaps?”

He doesn’t just carry this movie, he’s heaving the languid script like Ripley carries Newt away from the Alien queen; with triumphant fervour. He can go from sincere to psychotic with the same intensity and fluidity as Anthony Hopkins in Silence Of The Lambs. He’s that good! He reprises his role as David, the egotistical synthetic with a proclivity for human experimentation, exhibiting all the traits of a deranged sociopath with aspirations of divination. Since Prometheus David has dedicated much of his time at his procured evil residence trying to create a new species of alien derived from the same space cobras and Hug O Squid from Prometheus. Why? Well there’s a labouring, vaguely defined reason for his Frankenstein incentives, but it’s negligible really. Needless to say his ambiguous intent in the previous movie has distended into pure madness, delivered with devious relish by Fassbender. Though doesn’t murderous artificial intelligence sound strangely familiar? That’s because the biggest problem with Covenant is crucially evident in its familiar routines.

“The Covenant looks beautiful inside and out.”

If I was being severely critical Covenant is really just a stylised “Alien” remake with Prometheus aesthetics and most importantly for Scott, Prometheus mythology. There’s certainly a leniency in terms of coherency and convoluted storytelling that impeded the fluency of Prometheus, and it does attempt to try new things such as the way the Aliens gestate, but it does so without ever really standing out. There’s such a reliance on the what’s come before that it all feels reconstituted. You have a crew member’s body, who is killed aboard the Covenant, jettisoned into space. A distress signal from an unknown source that must be investigated. A psychotic synthetic. Derelict ship. A stupid person putting there heads right over the top of obviously dangerous eggs. A female lead who bears an uncanny resemblance to original kick ass heroine Ellen Ripley. And an ending fight that extraneously amalgamates both that of Alien and Aliens final conflicts with a shrug. It becomes painfully obvious that Scott really doesn’t know where to take the franchise without compromising the integrity of his original classic. And it’s a shame because the imagery and visual style of both Prometheus and this are exceptional to look upon. The environments, the ship, the way he contrasts light and shadow, particularly in scenes with Fassbender, channelling some Shakespearean villain, it’s stunning. But so is Megan Fox, doesn’t mean I want to hear her discuss the science of alien genetics!

“Seriously, does no one know how to fly a space-craft?”

Alien Covenant represents the over inflated hubris of a man who has dedicated years trying to distance himself from this franchise. Its ambitious, yes, but don’t mistake that vision for anything profound. It seems so concerned with expanding a mythology that it forgets to be scary or even interesting. It’s essentially dumb scientists doing absurdly dumb sciencey things, devolving further into intellectual aberration and becoming at points unintentionally comedic. From the slapstick humour of two separate characters slipping over a pool of blood at crucial moments, to Michael Fassbender teaching “Himself” how to play the flute by erotically cooing “You blow. I’ll do the fingering”. You have to wonder whether the script was written by someone distracted by reruns of “Benny Hill” and “Carry on”. I guess I shouldn’t complain too much considering the steep, downward trajectory the series was taking with the blasphemous Alien Vs Predator tangent. With potential followup’s like Alien Vs Superman. Alien Vs John Wick. Alien Vs Marvin The Martian. Alien Vs Alzheimer.
Alien Covenant isn’t a bad film, but it’s not a great one either. The characters are underwhelming and extraneous, the plot meanders like my Nan trying to recite a joke she’s forgotten the punchline too, before accelerating off like a fart in a hurricane (the story, not my Nan). It culminates in a predictable ending that even M Night Shymalan would dismiss as derivative and stupid. Alien Covenant may well be the third best in the franchise, but by the same extension “Attack Of The Clones” is the third best Star Wars prequel.

Have you seen Alien: Covenant? If so what did you think? And what is your favourite Alien movie in the franchise? Let me know in the comments below. Cheers.