Long ago, when game related information was exclusively reserved for big glossy magazines, that required you to actively leave your home to purchase these physical periodicals, there was one I purchase frequently: Official PlayStation 2 Magazine. Contained within its sealed plastic wrapping was not only the publication but also a demo disc, containing trailers to upcoming games and of course playable content. These cursory demonstrations presented consumers the invaluable capability to directly measure the potential quality of its retail equivalent, allowing us to make an informed and impartial decision on whether or not to buy them based on these fleeting sequences. It was playing one of these perfunctory demos that I came across a little game called Dark Cloud.

Dark Cloud is an Rpg where you negotiate various procedurally generated dungeons combating monsters and strangely thirst. There was a dehydration meter that depleted over time, unless you consumed bottled water you purchased from vendors or waded in reservoirs that could be found in the dungeons. It was a feature that greatly annoyed me, but the rest of the game was so enthralling it was something I just tolerated. One of my favourite elements of the game however was the city building mechanic that allowed players to rebuild a village in any arrangement they wanted. Of course seeing as it was only a demo I couldn’t engage with it in the same meticulous way I would have done if it were the full product, and alas I was never able to find a copy of it to truly assimilate myself into its hedonistic sensibilities. But a few years later, under rather fortuitous circumstances I did buy its successor, Dark Chronicle.

I had gone into my local W. H. Smiths for a casual peruse. Having recently gained part-time employment at a gardening maintenance company, the money I earned from my highly contributing 3 days servitude was duly squandered, sorry, wisely invested in games. And it was complete chance that I stumbled upon this familiar sounding title. Dark Chronicle was in fact Dark Cloud 2. Why the title was renovated here in the UK is beyond me, but my own personal hypothesis is that Dark Chronicle is less of a sequel and more of an aberration.

“The upgrade system for the weapons is one of Dark Chronicle’s most distinctive assets.”

The story revolves around Monica, a time travelling princess who must prevent the destruction of the world from the obviously evil sounding “Emperor Griffin” , who attempts to destroy the present by destroying the past. By migrating 100 years into the past Monica must unite with Max, a mechanic who accidentally finds himself the target of a psychopathic circus clown. You know, that old chestnut. Though the narrative weaves a familiar thread of plot devices and fantasy tropes, it’s endearing idiosyncrasies made Dark Chronicle so profoundly captivating.

Most Rpg’s, action or otherwise rely on a traditional methodology of levelling characters through an intrinsic progression system that enhances particular attributes, such as health, attack, defence etc. In Dark Chronicle you couldn’t do that in a traditional sense. Sure there were explicit resources that amplified these elements, but weapon customisation, or more specifically weapon augmentation is where Dark Chronicle really flourished. Enhancing the effectiveness of lighting on your gun for instance is incredibly advantageous provided your combating water based adversaries, but against another elemental monster it’s profoundly useless! Because each new stage applied a new contradictory environment for you to traverse, merely applying concerted efforts on one or two different attributes to help you navigate one specific area meant sacrificing a weapon’s effectiveness further into the story. You also had to monitor the vulnerability of these weapons as excessive usage would mitigate their effectiveness after a period, requiring you to use repair powder to restore their rigidity. 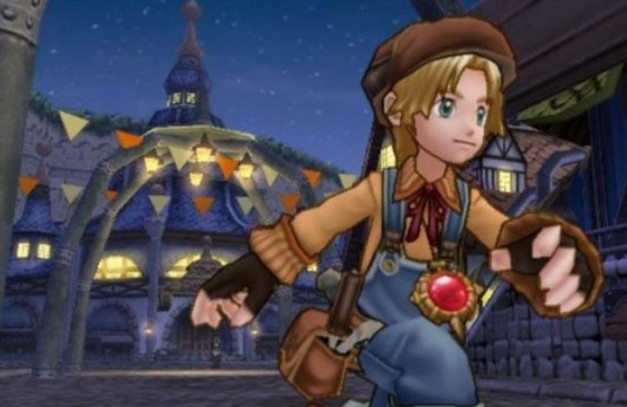 “There was always something to keep you occupied”

Dark Chronicle actually encouraged you to think. To evaluate your inventories compatibility not just for the next stage, but for future encounters too. And because you could switch between two playable characters in Monica and Max, three if you include Max’s mechanical tank “Ridepod” then there’s an even greater incentive to diversify characters as well as their weapons, which unlike Dark Cloud do not disintegrate beyond repair. Also Dark Chronicle mercifully abstained from integrating the same irritating “thirst meter” that impeded you in its forbear, opting instead for a more affable alternative: namely nothing. But Dark Chronicle thankfully didn’t ignore one of its predecessors most lucrative features, town building.

I simply can’t express how much I adore this feature. There’s something so gratifying about constructing a village to my own very personal specifications that just appeals to my rigorous nature. Distributing trees evenly amongst the residencies. Erecting fences around the homes. Forging paths to each and every property to ensure a sense of community. That may seem like an awful lot of effort to apply to such an extraneous component, but it’s one I relished with enamoured dedication, particularly when you see how it affects the future. You could travel between the past and future and observe what a profound effect the placement of specific buildings, trees or rivers has in 100 years time, which is for lack of a more articulate word, cool!

I could carry on with a verbose thesis analysing every facet of this game to determine precisely why this game means so much to me, but I think I’ve made that clear enough already. Dark Chronicle radiates a lurid vibrancy absent from its stoic predecessor, illuminating every environment with a distinctive tone, even though most of these procedurally generated dungeons adhered to a conformed structure. The combat was simple yet engaging, with weapon customisation that necessitated logistical organisation. The story though structurally basic provided enough sincerity from its superbly voiced characters that you could forgive its banal advancements and at times accept the overarching simplicity. What Dark Chronicles excelled at was enchanting you with its mesmerizing world. Compelling you to keep playing until 3am, forsaking all other duties, which I did!

It didn’t do anything perfectly, it just did everything well, keeping me engaged for months on end. And that’s why “Dark Chronicle” is my #6!